Recent updates to the food and beverage scene in the Ypsilanti region include new businesses and ownership changes to existing establishments. We caught up with two new businesses – one selling juice, the other coffee – and a well-established bar and grill making big changes.

“I was juicing and posting on social media, and people were asking if I could juice them,” she says. “I ended up bottling maybe 30 juices and doing what I called sampling Sundays, driving around town and giving out free juice to people who inquired.”

Weems also met her boyfriend and business partner, Brandon Frye, through Juice while selling juice at a local basketball tournament. He liked the juice and offered to put his background in graphic design to work on creating a logo. 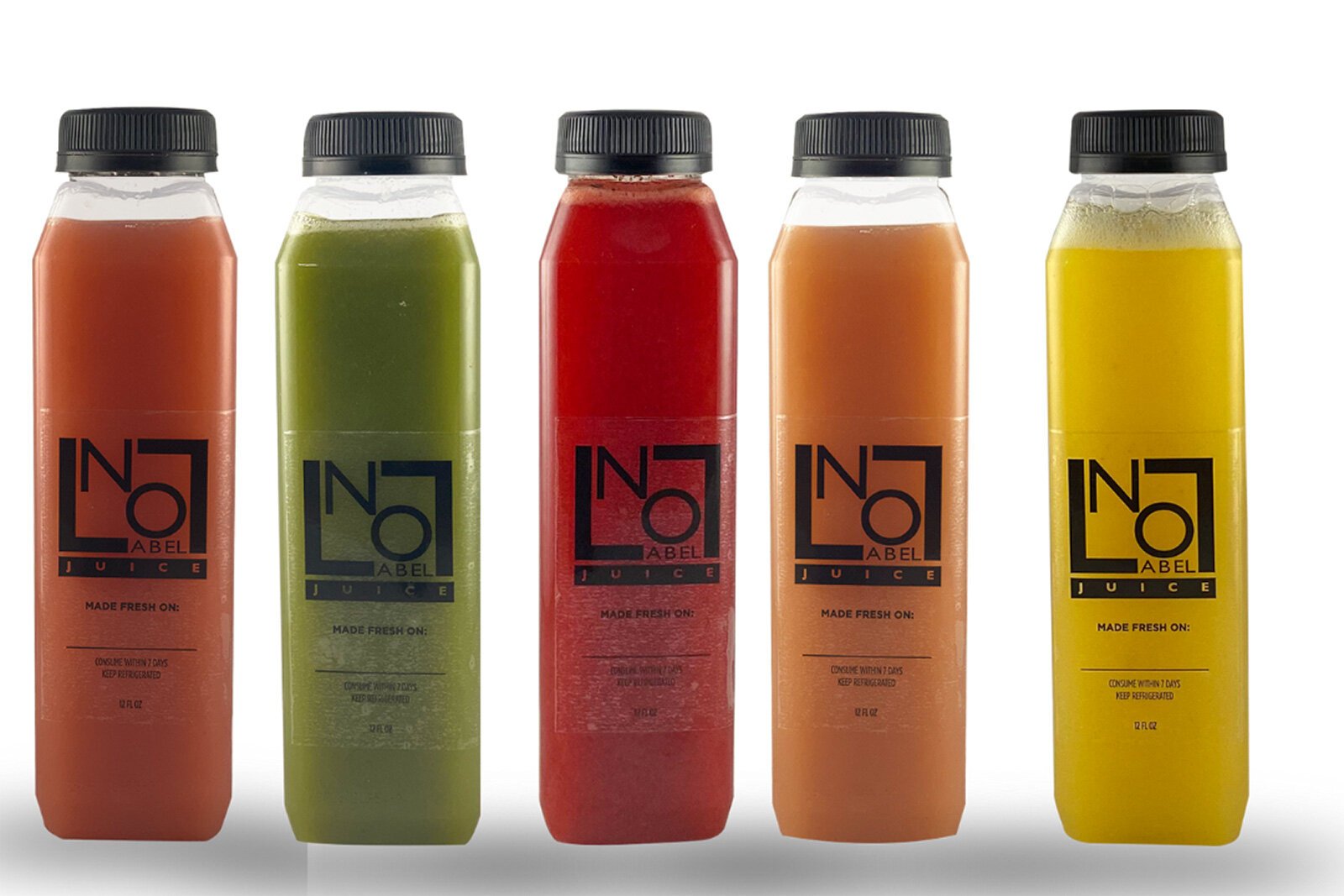 No label juice.
Weems says the ingredients in her drinks are “minimalist” but informed by a course she took in nutrition. One of its bestsellers is its “Beet Around” juice, made with beets, apples and cucumbers. She says beets are a good food for those with high blood pressure, while cucumbers are great for hydration.

“We don’t add any artificial flavors. It’s all fruits and vegetables, with no added sugars,” she says.

Weems says the name No Label Juice comes from his early free label-free samples, but there’s another, more community-based meaning behind the name. 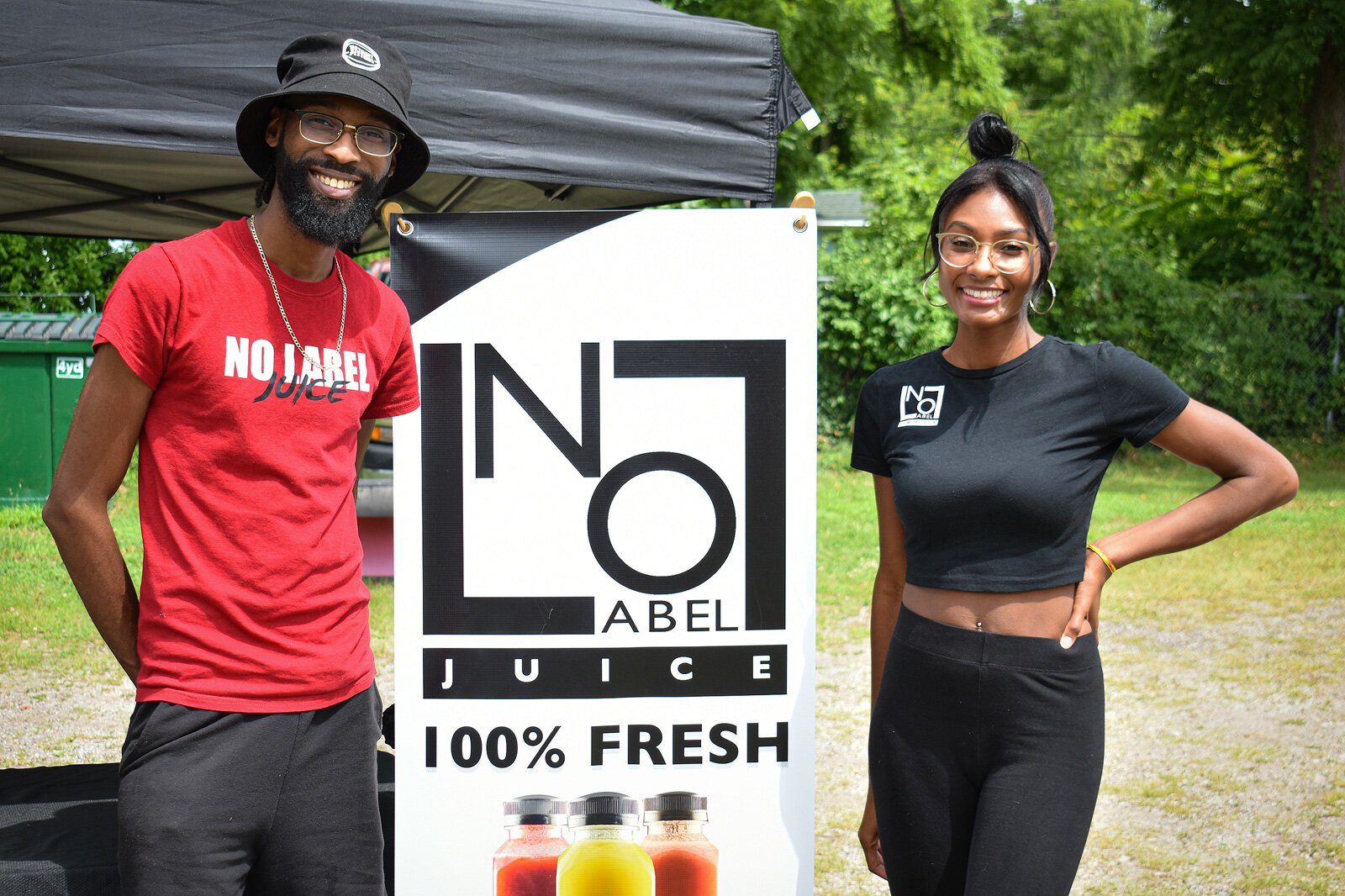 Brandon Frye and Nashia Weems of No Label Juice.
“We want to give back and help people gain resources, and we want to help those people without labeling them,” Frye said. “Sometimes it’s a stigma to seek health care. We want to encourage anyone who needs help to get help and seek out resources.”

Currently, Weems juices at growing hope‘s incubator kitchen, and she regularly sells at farmers’ markets in Ypsilanti and Ann Arbor. She also sold her juices at various community events over the summer, such as Growing Hope Community Day last August.

“We hope to expand and be in different markets,” says Weems. “You can expect to see us in different cities soon.”

The new Ypsilanti neighborhood café, Live Coffee, was not in owner William Sloan’s plans three years ago when he bought the auto mechanic shop at 202 N. Washington St. When the COVID-19 pandemic hit Michigan in 2020, his tenants were struggling to stay open or keep employees. Sloan, an experienced property manager, offered them reduced rent for a year, but said it became clear the tenants weren’t going to reopen their store anytime soon. 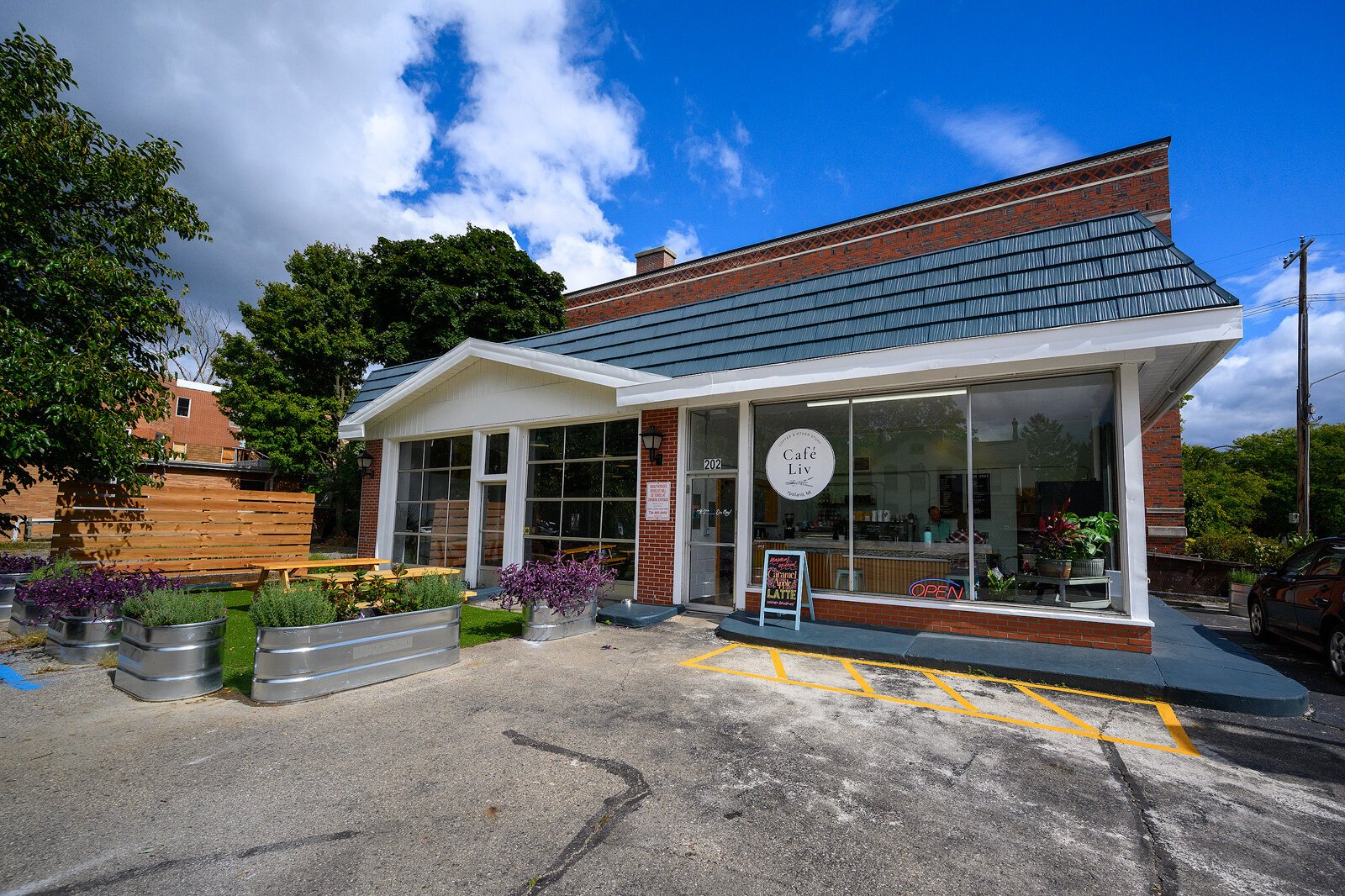 Coffee Book.
Sloan says it took “a considerable investment” to turn the store into a cafe, but the store’s floor-to-ceiling windows remain.

Sloan hosted a soft opening in mid-July for the new business, which he named after his young daughter, Olivia. He poured espresso shots himself for the first few weeks the store was open, adding a head barista later in the summer.

Sloan says the shop offers seasonal specials like a caramel apple latte, but he likes to keep the menu simple.

Coffee Book.
“It’s a neighborhood cafe,” Sloan says. “You come to find your colleague or your friends [and] have a cup of coffee. I wanted the coffee to be on point.”

Sloan says he hopes to host workshops, musical performances, pop-up dinners or weekend food trucks and other community events at the cafe.

The King Beagle, located at 817 E Michigan Ave. in the canton of Ypsilanti, had a bad reputation. Serious fights have busted at the barwhich was also known as a biker haunt in its previous incarnation as Arthur’s Bar.

But staff have been looking to build a friendlier reputation for the bar since new owner Ian Greenlee took over in the summer of 2021. The Regal Beagle recently added barbecue to the menu and live music to the entertainment list . 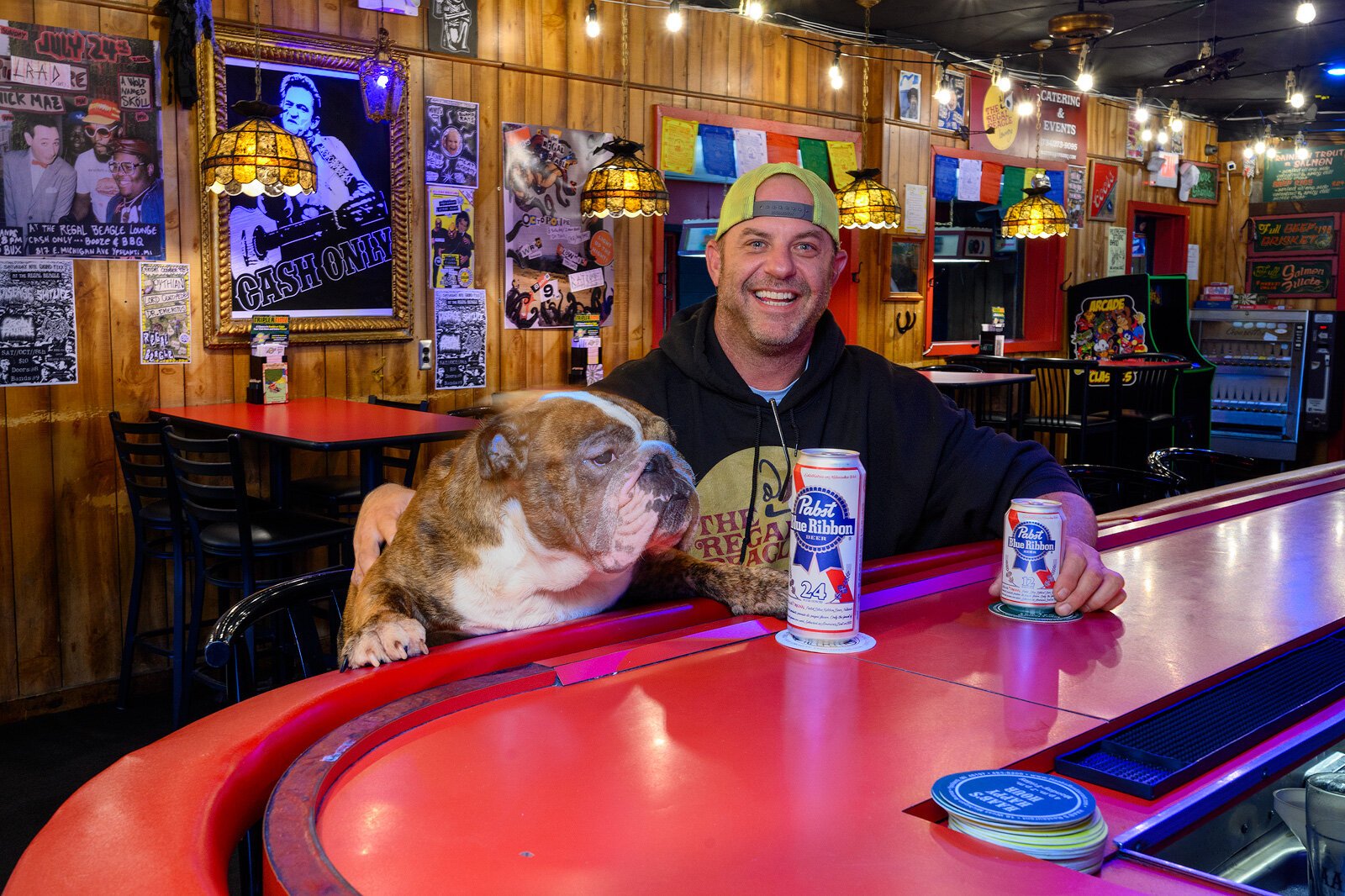 Matteo Melosi, manager of the Regal Beagle Bar, with his dog Zeus.
Pit Master Kurt Prowell grills meat over Michigan cherry wood in large smokers outside the restaurant. Prowell also helps coordinate the facility’s music programming. He says he thought Ypsi “lacks a concert hall that everyone can play in”. Staff have just finished constructing a stage in the corner of the building to create a more welcoming space for musicians.

Performers have included folk, hip-hop, punk, metal, garage and American roots numbers. The Regal Beagle will host a few swing country bands this fall, and the roster is complete with over 30 bands booked for October. 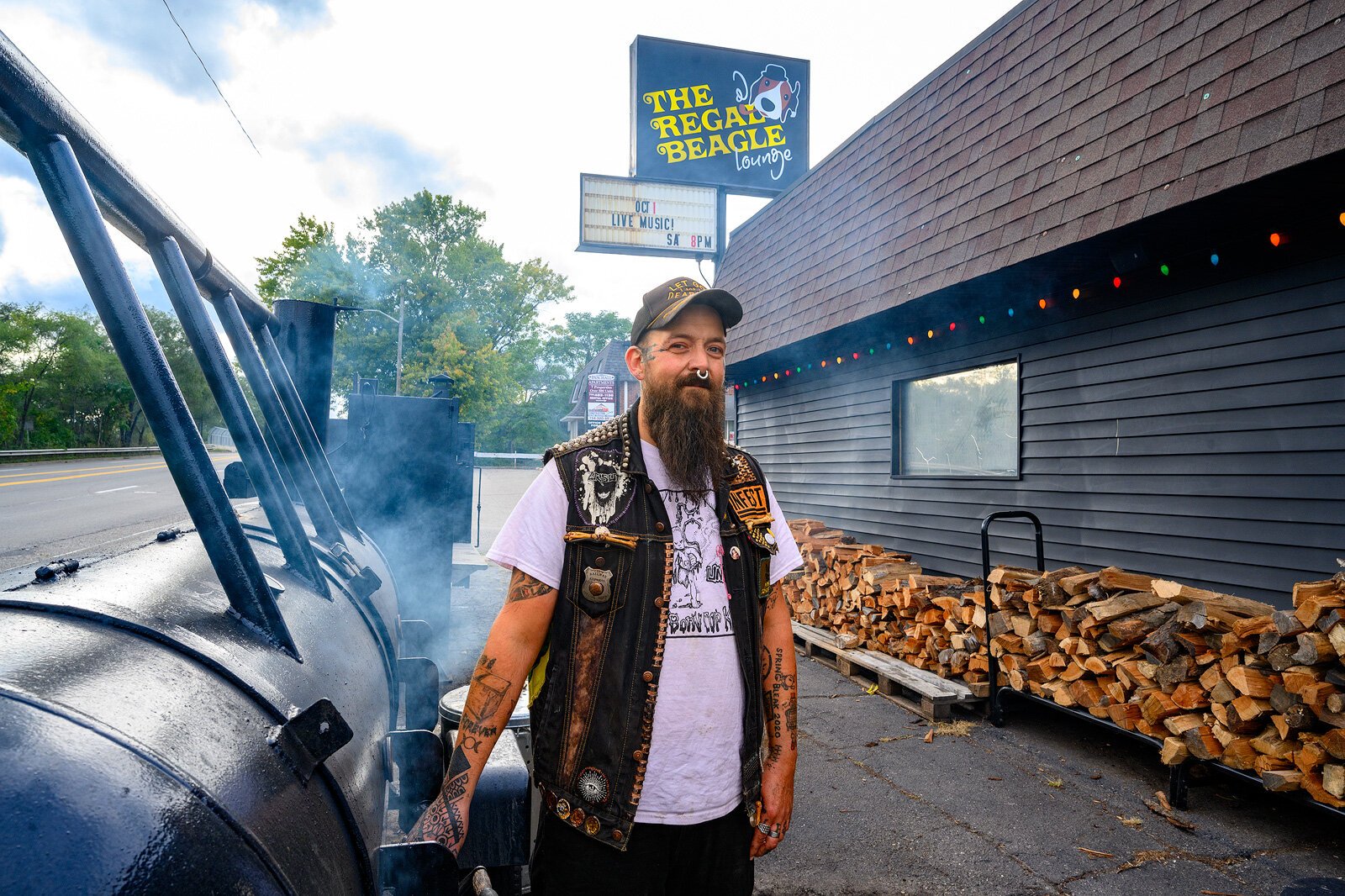 The Regal Beagle Pit Master Kurt Prowell.
Barbecue is the backbone of the Regal Beagle’s new menu, and featured meats rotate, though Prowell says brisket is usually one of the choices. He recommends calling the bar or checking his Facebook page for the menu of the day.

Bar manager Matteo Melosi says he thinks the Regal Beagle’s new offerings fill “a pretty big gap” for a welcoming restaurant with wholesome offerings. He says there is no oil, butter or mayonnaise in the building and the meats are seasoned with dry pickles.

“There hasn’t been a hospitable place in this neighborhood for 30 years, except for fast food,” Melosi says. “…There were ladies who lived here behind this bar for 40 years who never went there, and now they are bringing their families. There are good things happening in the neighborhood.”

Sarah Rigg is a freelance writer and editor in Ypsilanti Township and project manager of On the Ypsilanti field. She joined Concentrate as a news editor in early 2017 and occasionally contributes to other Broadcast Media Group editions. You can reach her at [email protected].

PORT TOWNSEND — The owner and a mechanic from Gary’s Cars and Trucks put out an oil rag fire in the auto shop before firefighters arrived. Owner Charles Gary and mechanic David Stratton found rags of burning oil in the store on Tuesday afternoon and hit them with two fire extinguishers and a garden hose. […]

Trade Me invests in an auto repair start-up, My Auto Shop

A body shop has found human remains stuck in the undercarriage of a car more than a month after a crash that killed a man push a shopping cart on the New Jersey Turnpike, local police confirmed. A female driver involved in the accident took her car to the Goodyear Auto Shop in Linden on […]